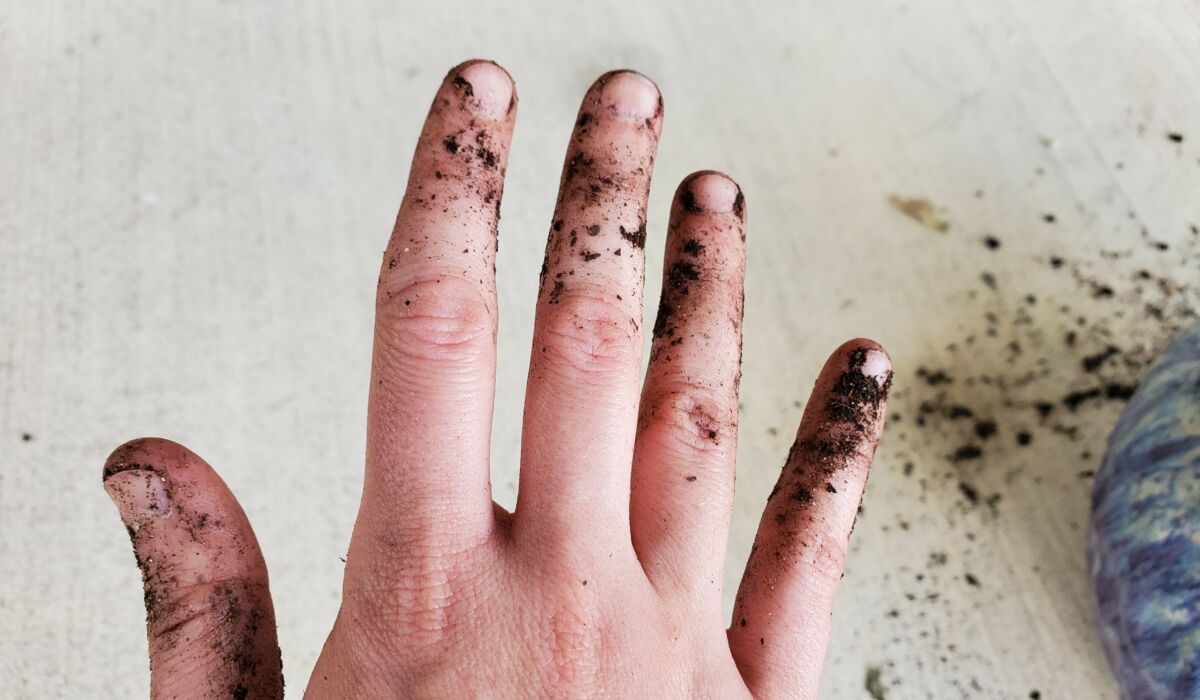 I can’t count how many times I’ve sat down to relax after doing a project, started absentmindedly rubbing my thumb across my fingertips, and felt little particles of dirt stuck around and beneath my nails. I love it.

I’m using the term “dirt” loosely here. Mainly as a way of describing any stray particle that clings on. Dough, flour, paint, charcoal, guitar callouses, plant stains, soil – doesn’t matter, it brings a smile to my face every time. (Unless it’s serrano or jalapeno pepper remnants. Then it brings tears and…just a few expletives.)

I have never been the person with the beautifully manicured hands. As a kid I kept my nails short to play violin. But honestly, I didn’t feel like I was missing out. If my nails reach past the pads of my fingertips, I find them more of a hinderance than anything, getting chipped away or snagged on something. On the rare occasion I’ll paint my nails, but they don’t stay pristine for long. I’m all for dangling some earrings or sprucing up my outfit, but I tend to go for comfort and convenience when it comes to my hands and my feet.

I think subconsciously I tend to prefer the projects that are hands on and get a bit messy. There’s something about dirt that I just can’t explain. It makes me think of a therapeutic technique called grounding using the five senses. Essentially you are trying to manage stress and anxiety by focusing in on your sensory experiences. My own personal theory for why these “dirty” projects are so satisfying is that they are powerful at grounding. The more immersed my senses are in the activity, the more connected to the present moment I feel.

What’s even better, those little stragglers of dirt keep me grounded beyond the project itself. I just love when you end up carrying remnants of a creative exploit with you after you’re done. If you watch me closely enough (please don’t, because it’s creepy), you’ll see that I like to go back to the dirt – feel the rough edges, smell the last traces of enjoyment. You know the sticky smell of garlic after you’ve been cooking? Can’t get enough. Or the caked on floury goodness of dough? I’ll keep sniffing my fingertips all day. Even the metallic and resiny smells from guitar playing gives off a pleasant aroma to me. It’s like I’ve been tagged by happiness and get to carry it around with me.

Proof in the Pudding

Don’t let my blog and online presence fool you, I am not the pinnacle of activity. Just ask my husband how many indoor chores have been on the to-do list for over 3 months. And I enjoy binge-watching a show or reading a book all day like anyone. But nearly every time I do one of those hours-long benders, I end up feeling restless and a little gross. At some point, I end up tipping my internal scale too far in one direction.

For me, relaxation cannot be just resting. No matter how hard I try, I can never fully escape the importance I place on productivity. Getting things done. Marking things off. Fixing something. Doing what needs doing. Learning or creating something new. I’ve realized that, when I allow myself to relax, dirt reminds me that I’ve already had a job well done and I deserve the respite. It’s the evidence that tells me it’s OK to take a beat. I guess if I were smarter, I’d do what our dog does and fake it – run outside and roll around in some dirt for a few minutes, then lie around all day. Alas, I am just not that clever. 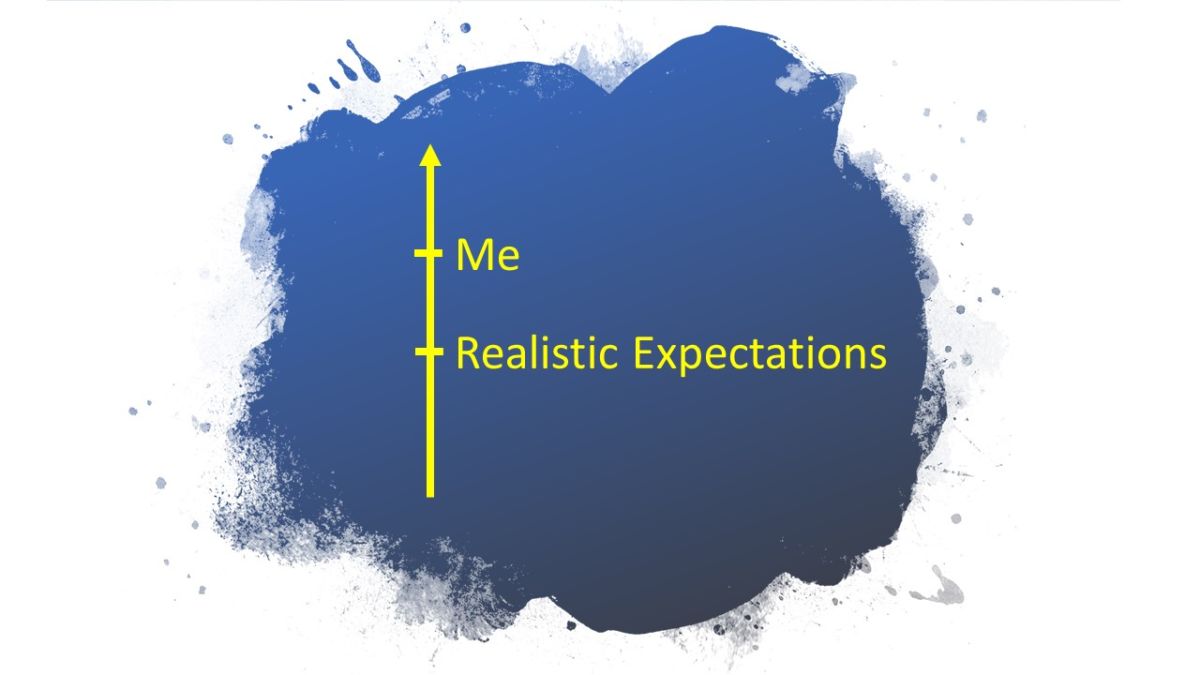 I have a lot of them. I expect a lot from everything and everyone, particularly myself.

Y’all. It’s a pan-freaking-demic. And that doesn’t even cover HALF of it. Aside from being in a helping profession that’s part of the systemic problems I am somehow tasked to help my clients overcome, I just came off of 2 ½ days without power during freezing temperatures this part of the country isn’t built for. Oh, followed by 3 days of no running water. Did I mention the impassable roads because we lack salt and snowplows? I’m not even going to complain about boiling my water because it beats gathering snow and rain barrel water for the toilet. Homesteaders, off-the-grid’ers, people living in cars or on the streets, and others who live tougher lives than I do – I respect you so much.

This is all to say that the bar I had set for myself probably needed some major readjustments…and that was BEFORE the kickstart of things in 2020. 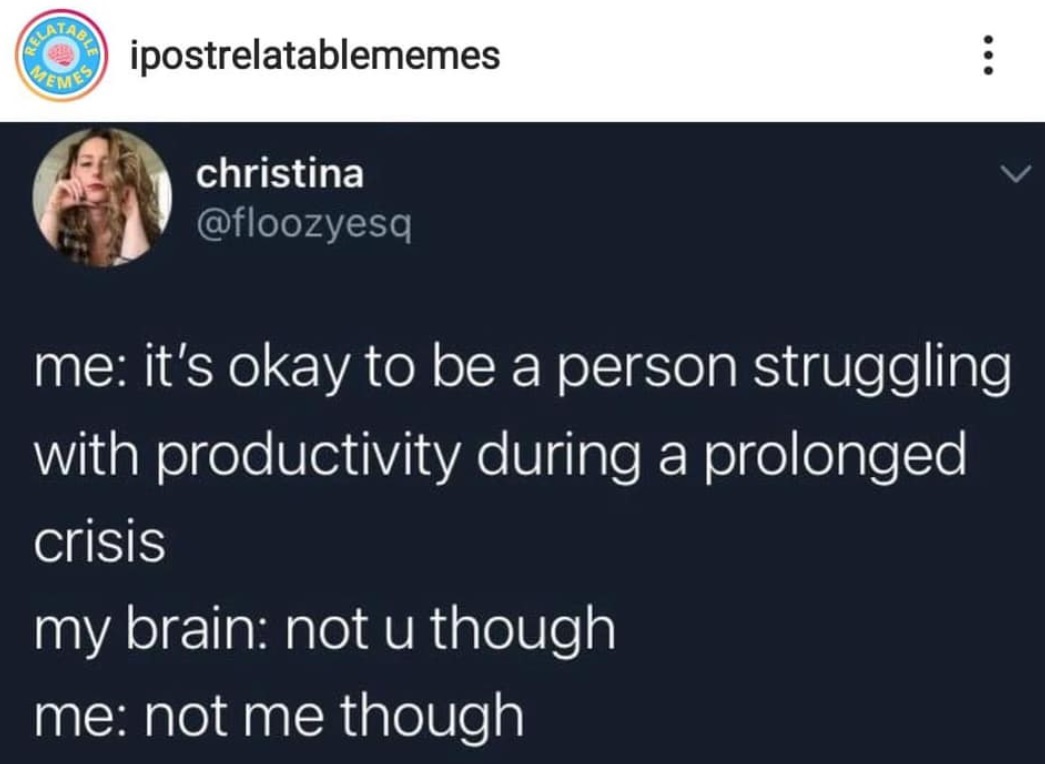 When a friend posted this, I laughed for a solid 10-15 seconds. Like, check yourself in the mirror because this might finally be the moment that you morph into the Joker kind of laughter.

It hit so close to home.

I have been working really hard on something for the past 2 years and I think I will be working on it until the day I die: Not seeing rest and relaxation as being ‘lazy’. When I started to pay attention to it, I realized I was using that word a lot. “That’s lazy!” “Don’t be lazy!” “I’m so lazy!”

As a psychologist, it goes without saying that I firmly believe in the power of words. Think about it:

I am going to rest / relax. Take a break. Take care of myself.

I am going to be lazy. Do nothing. Be a waste of space.

In our common vernacular, they are synonymous. But damn, one of those packs a hell of a punch, particularly when you look at it through a cultural emphasis on capitalistic efficiency and production.

Naturally, I have psychoanalyzed myself on this. While I do believe the cultural context cannot be ignored as a part of how all Americans are pushed to view achievement as the ultimate measure of a person’s value (not to mention our technological world’s insistence on us being available and entertaining to others 24/7), I also recognize my own role in this. See, I have a bad habit of believing that putting in anything less than 100% is dishonest. Reaching one’s full potential is something I truly value, so anything less than giving your all runs counter to my very being. While this makes me a reliably hard worker, it can also make me a TERRIBLE loser and an even worse relaxer.

Never fear, my dear parents! I know COVID has given you major cabin fever, but before you strap on those masks and head outside to take yourself on a long and arduous guilt trip of how you “ruined your child’s life” (you know who you are), I love my work ethic and my passion to always be living and learning that I assume came from you. These are great values that were instilled in me. It has made me a thinker, a problem solver, a creator. But you know what? Your greatest strengths tend to be your greatest weaknesses. What can ya do.

Proof in the Fictional Character Pudding

Just so you know, it is taking all of my willpower not to continue with my comic nerd references to expand on this point. Ah screw it, you knew the risks going into this.

BATMAN! The great analyzer and strategizer who uses his trauma to drive himself to achieve at a level thought humanly impossible – traits that isolate him from the very people who can help him succeed and mend his emotional wounds.

SUPERMAN! Being from Krypton gives him awesome powers when he takes in the sun’s rays – just gotta ignore the pesky green bits of his former planet if he doesn’t want to die.

HARLEY QUINN! I just read the Black Label comic about her desire to understand and heal supervillains – which leads her down a path to her own villainism.

Marvel fans don’t get offended, I love your characters, too. Batman just happens to be my one, true love.

Knowing my tendency to set my expectations high is a big part of why I didn’t want to start this blog. I knew I’d go in whole hog. I didn’t want to feel guilty for not keeping up with it. Perhaps more than that, I didn’t want to start something “for no reason”. But, in the wise words of myself earlier in this blog, ah screw it. This blog is one of the ways I am trying to practice lowering my expectations. (Ugh, even saying that makes me cringe a little.) But I don’t need to post every week. I don’t need to make this blog into something practical or productive. It just needs to be something I want to do. In other words, congratulations on being a guinea pig in my lowering of the bar.